Over EUR 2.8 billion worth of drugs in Eurojust-supported cases in 2019

With the support of Eurojust, EU Member States last year tackled illicit drug trafficking worth over EUR 2.8 billion. Approximately EUR 2 billion in criminal assets were frozen and over a thousand weapons, mobile phones, laptops and cars were seized. A total of 2 686 suspects were arrested or surrendered to other Member States, through action days, coordination meetings and other judicial support provided by Eurojust. These first operational achievements were presented today to European Commissioner for Justice Mr Didier Reynders by Eurojust President Mr Ladislav Hamran.

Eurojust President Mr Ladislav Hamran said: 'It is our role to assist Member States in combatting cross-border crime and to deliver concrete results, in order to get justice done and show citizens that crime doesn't pay. We stand ready, on a daily basis, to support the EU and the countries with which we have cooperation agreements, to give appropriate judicial support and coordinate actions, which otherwise would be very difficult.'

European Commissioner for Justice Mr Didier Reynders stated: 'I warmly welcome these results, which show that Eurojust has gained full speed and is giving rapid judicial support and follow up to requests from Member States. It is only through such active cross-border coordination and the pivotal role of the Agency that we can really tackle international organised crime. Criminals don't stop at borders; European judicial cooperation is essential to take action against them.'

The volume of drugs involved in Eurojust cases consisted of 788 133 kilos of synthetic drugs, 28 585 kilos of cocaine, 9 224 kilos of heroin and 41 283 kilos of cannabis. In total, 21 323 victims of crime were concerned in cases referred to Eurojust by Member States last year. 800 agreements were made on the most effective strategy to prosecute suspects.

Eurojust organised 27 coordination centres in 2019, during which major coordinated judiciary and law enforcement actions were taken, at the request of and in close cooperation with authorities in Member States. Additionally, 430 coordination meetings were held, to prepare and take judicial actions in EU and third countries.

The total number of cases supported by or coordinated through national desks at Eurojust grew by 17 percent last year, to 7 804, of which nearly half were newly opened. This figure is more than double the number of cases dealt with in 2014 (3 401). The full results of 2019 will be presented this spring in the annual report of Eurojust, which will also focus on priorities such as combatting terrorism, cybercrime, trafficking in human beings and migrant smuggling. 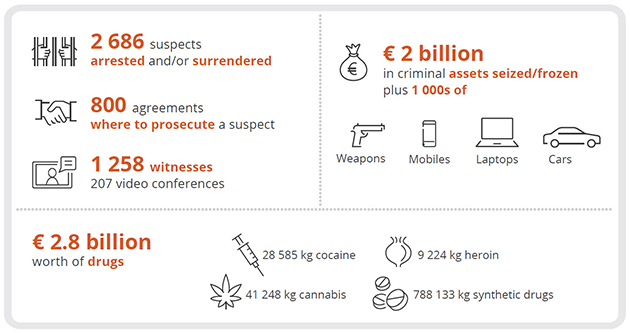