The discussions centred on enhancing judicial cooperation within the European Union and beyond, as well as on promoting the use of Eurojust's cooperation tools and instruments. Eurojust's President and Vice-President emphasized the bridge-making role of Eurojust in bringing together prosecutors from 28 different national jurisdictions and 30 legal systems, and stressed the need for appropriate funding for Eurojust's fight against cross-border crime.

State Secretary Lange praised the progress made by Eurojust and the German Desk since his first visit in July 2015 in the fight against cross border-crime. He underlined Eurojust's importance in quickly and effectively coordinating transnational investigations and prosecutions of serious crime, including terrorism, thus ensuring criminal justice across the European continent.

Mr Lange stressed: 'Eurojust plays a key role in the effective prosecution of cross-border crime in the European Union. German prosecutors frequently exchange information with their European partners via Eurojust. Joint investigation teams, for example, are a major success factor in the investigation of cross-border crime. The further development and strengthening of Eurojust are therefore important to the German Federal Government. In November 2018, the Ministers of Justice of Belgium, Germany, Spain, France, Italy, Luxembourg and the Netherlands agreed to reinforce Eurojust and step up their efforts to share findings on criminals and terrorist activities. Germany, particularly the Federal Prosecutor General's Office, is heavily involved in these efforts, and is eager to contribute in this regard.'

Mr Hamran stated: 'We warmly welcome the visit of the German Secretary of State as it demonstrates Germany's important commitment to enhancing our successful collaboration. Eurojust's successful work is based on European values, with respect for due process and the fundamental rights of European citizens. This work is also an inspiration for States outside the European Union. Only together can we create and sustain an area of freedom and security in Europe. I strongly believe that we can set an example for other countries to join the Eurojust family.'

Mr Meyer-Cabri pointed out: 'Achieving coordinated investigations through Eurojust's coordination role is a key element to successfully fight cross-border crime. German prosecutors have fully recognised this potential. In the last four years alone, the support asked by them from the German Desk at Eurojust has risen by 350%. The second visit to Eurojust of the State Secretary shows the full political support of the German Federal Ministry of Justice and Consumer Protection for our work.' 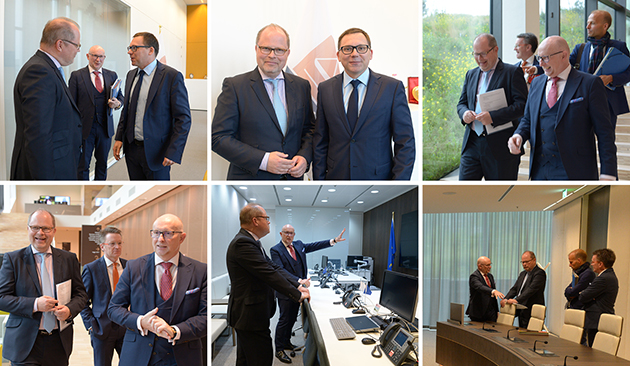