Today, Eurojust welcomed the Dutch Minister of Justice and Security, Ferd Grapperhaus, and the European Commissioner for Justice, Consumers and Gender Equality, Ms Vera Jourová, for the final step in the inauguration of Eurojust's new state of the art premises in the international zone in The Hague. The Minister and Commissioner were invited to unveil a statue in front of the building, offered to Eurojust by the Dutch government and created by Mr Fernando Sánchez Castillo.

The new Eurojust headquarters is a unique purpose-built facility, constructed and owned by the Dutch State and rented to Eurojust. The building can accommodate up to 400 employees and has been tailored to Eurojust's mission to develop and enhance judicial cooperation, coordination and mutual trust in the European Union's fight against serious organised cross-border crime.

'This new building is the community of thousands of national prosecutors and law enforcement officials around the EU who  every day, everywhere in Europe  work hard to fight all forms of criminality, and call on Eurojust for support and guidance', said Ladislav Hamran, the President of Eurojust. 'And they all did so with one common goal: to ensure that justice and security are brought to Europe's citizens.'

Mr Hamran went on to thank Minister Grapperhaus for the unwavering support of the Dutch government in creating an optimal work environment for more than 8 000 legal practitioners who visited Eurojust's premises last year to look for answers, best practice and inspiration in the field of judicial cooperation. 'Looking ahead to the many challenges to justice and security that the future is presenting us with, we know that our new headquarters offers a solid base from which we can deliver the quality of support that Member States and other stakeholders rightfully expect from us.' 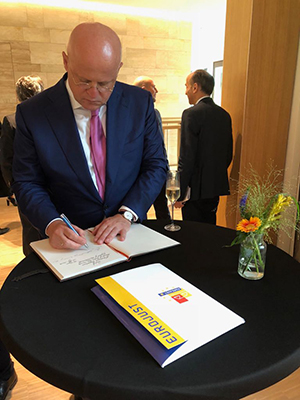 Minister Grapperhaus said:  'The Netherlands is convinced that Eurojust is now perfectly equipped to fulfil its crucial role in the field of judicial cooperation within the EU for a long time to come. I would like to wish Eurojust and all those who work here the best of luck in exercising that role. The Netherlands remains keen to continue to support Eurojust to maintain its self-standing, complementary role next to the other JHA agencies and that it has adequate resources to do its important work.' 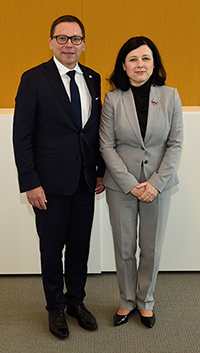 Commissioner Jourová said: 'Eurojust plays a key role in the area of freedom security and justice. The increasing workload shows the clear added value of Eurojust, especially in cases which matter most to our citizens: terrorism, illegal migration and cybercrime, to name just a few. Eurojust can rely on the Commission's support in its mission. I would like to warmly thank the President, Ladislav Hamran, the Vice Presidents and the President's team for all the work undertaken in the last year to reform, streamline and revise the organisational structure of Eurojust to a solid, efficient and sustainable organisation that can thrive in its new premises.'

Background:
Eurojust is the European Union's Judicial Cooperation Unit, established in 2002 to stimulate and improve the coordination of investigations and prosecutions and the cooperation between the competent authorities of the Member States in relation to serious cross-border crime, particularly when it is organised. The main crime types dealt with by Eurojust are fraud, drug trafficking and money laundering. Eurojust has also stepped up its activities in fighting terrorism (87 cases in 2017, including the attacks in Berlin, Paris and Brussels), cybercrime, migrant smuggling and trafficking in human beings. In 2017, Eurojust handled 4 125 cases, including 2 698 new cases, an increase of more than 10 per cent compared to the previous year.