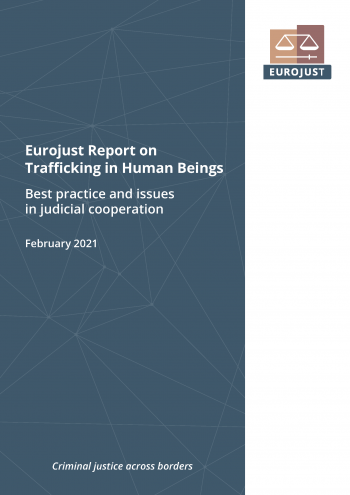 Cross-border cases of trafficking in human beings (THB) are complex and difficult to investigate and prosecute. They reveal the prominent role of organised criminal groups. When gaps in judicial cooperation appear it is the victims of THB who suffer. In October 2020, the European Commission noted in its progress report on THB that judicial authorities in the Member States had raised serious concerns about difficulties in judicial cooperation. This report was prepared by the European Union Agency for Criminal Justice Cooperation (Eurojust), with the aim of responding to these concerns. It presents solutions used by the agency when assisting in complex THB cases requiring judicial coordination. The report also aims to inform the forthcoming EU strategy against THB. It expresses Eurojust’s readiness to play a central role in the future strategy, by bringing substantial added value to the operational dimension of combating THB. The final aim of the report is to assist in successfully bringing human traffickers to justice, while protecting the victims. The report is divided into two main parts. The first part relates to the coordination of investigations and the second to victims’ rights.