At a ministerial meeting on counter-terrorism in Paris today, France, Germany, Spain Italy, Belgium, Luxemburg and the Netherlands have launched an initiative calling for the creation of a European judicial counter-terrorism register at Eurojust, the EU's judicial cooperation unit.

Eurojust declared that it stands ready to swiftly create and host the counter-terrorism register, which would bring more clarity, security and speed to investigations after terrorist attacks and increase the chances of bringing terrorists to justice.

Mr Ladislav Hamran, President of Eurojust, was present at the European Summit on Counter Terrorism and said: 'The European Union needs improved information sharing between prosecutors. Swift and secure data exchange about investigations and prosecutions in the Member States is vital for better coordination of our joint efforts against terrorism. The counter-terrorism register is a step in the right direction and Eurojust is ready to host it.'

Since 2015, prosecution authorities around the EU have turned to Eurojust for coordination and practical support in 256 investigations of terrorist offences, including in the investigations after the attacks in the Bardo Museum and Sousse, Tunisia, the Thalys train, Paris and Saint-Denis, Brussels and Zaventem, Nice, Berlin Stockholm, Barcelona and Cambrils, and Turku, Finland. The cooperation has resulted in the creation of joint investigation teams, coordination of prosecution strategies and provided real-time support to actions in the field.

However, data exchange about prosecutions, convictions and court proceedings for terrorist offences across the European Union is at present not systematic.

On 20 June 2018, the Ministers of Justice of France, Germany, Spain and Belgium signed a Declaration calling for the creation of a European Judicial Counter-Terrorism Register (FR | DE | ES) that would make it possible to proactively establish possible links between cases and to identify coordination needs for the investigations. The legal basis for working together is already in place (Council Decision 2005/671/JHA), which should be systematically applied in all EU Member States. 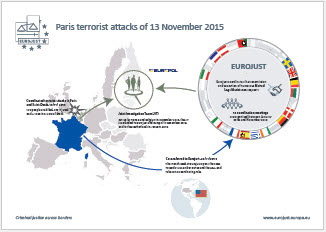