Today, Ms Etilda Gjonaj, Minister of Justice of the Republic of Albania, and Mr Ladislav Hamran, President of Eurojust, the European Union's Judicial Cooperation Unit, signed a cooperation agreement to enhance operational and strategic judicial cooperation between Albania and Eurojust. It will be the third cooperation agreement between Eurojust and a State in the Western Balkan region and is a further important step in the joint fight against serious transnational crime, since it will unlock the possibility of a safe and efficient exchange of judicial information and sharing of evidence. The signing ceremony took place in the context of this year's EU-Western Balkans Ministerial Forum on Justice and Home Affairs in Tirana, and in the presence of Dr Josef Moser, Minister of Constitutional Affairs, Reforms, Deregulation and Justice of Austria, and Ms Vera Jourová, European Commissioner for Justice, Consumers and Gender Equality.

Ms Etilda Gjonaj said: 'The agreement with Eurojust will bring a qualitative improvement in the conduct of transnational investigations. It will enable Albanian prosecution teams to strengthen cooperation with their colleagues from EU Member States and other countries that are part of this structure, including from our regional partners, fYROM and Montenegro, will increase the exchange of judicial information and will allow Albania to send a Liaison Prosecutor to Eurojust, in The Hague, on a permanent basis. This will directly contribute to the common results in the fight against organised crime, terrorism and corruption, will raise trust in our investigative capacities, and will bring Albania closer to the European Union.'

Mr Hamran said: 'In our globalised world, criminals cross borders and so must our criminal justice systems. I warmly welcome the conclusion of today's cooperation agreement, which will consolidate our partnership and bring Albania fully into the Eurojust family. It will unlock the full possibilities for Albania to take part in and benefit from all the practical cooperation tools offered through Eurojust to prosecute serious, cross-border crime cases, bring suspects to justice and protect our citizens. Only together can we make Europe a safer place.'

Dr Moser said: 'On an international level, we can only crack down on crime if we act together in a global effort. Eurojust promotes and facilitates the coordination and cooperation among the national judicial authorities in prosecuting serious cross-border crime in the EU. Yesterday, we saw in the framework of the Western Balkans Conference that Albania is now ready to cooperate more closely with the EU  also in the area of criminal law. The Austrian Presidency greatly welcomes the cooperation between Eurojust and Albania. In this context, we have importantly set the course for better and more intensive cooperation of Albania with the EU.'

Ms Jourová said: 'I welcome the signature of the Eurojust-Albania cooperation agreement. Closer ties between the Albanian and European judicial authorities will help improve the fight against transnational crime. The aim is simple: we want to make life of organised crime groups more difficult by exchanging information and evidence faster. The agreement will strengthen cooperation and mutual trust between Albania and its EU partners, contributing to Albania's European perspective.' 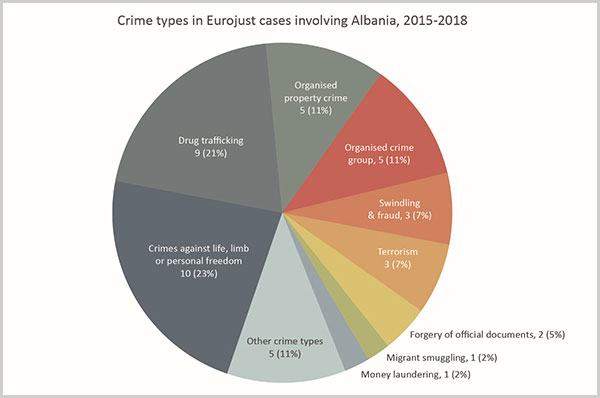 With today's agreement, Albania will benefit from accessing Eurojust's information systems as well as from sharing personal data and evidence with prosecutors and investigators from all over Europe. The agreement creates also the possibility to appoint a Liaison Prosecutor to Eurojust in the near future to further improve cooperation. Since 2015, Albania has been involved in 36 international investigations into serious cross-border crime, supported by Eurojust, mainly concerning organised crime groups that engage in drug trafficking and crimes against life, limb or personal freedom, such as murder, kidnapping and illegal trade in human organs (click on image to enlarge). Since 2017, Albania has also participated in two joint investigation teams (JITs), including one with Italy. The formal negotiations to enter into a cooperation agreement were initiated in 2016.

A strong hands-on partnership with the Western Balkans

Since 2008, Eurojust has established an increasingly strong framework for structural judicial cooperation between EU Member States and the Western Balkan States in the area of serious crime. Eurojust has cooperation agreements in place with fYROM since 2008 and with Montenegro since 2016. These States also have Liaison Prosecutors appointed at Eurojust in The Hague, who work side by side with magistrates from the EU Member States to facilitate ongoing investigations. There are contact points for Eurojust in five Western Balkan States, including in Serbia and Bosnia and Herzegovina (click on image to enlarge). 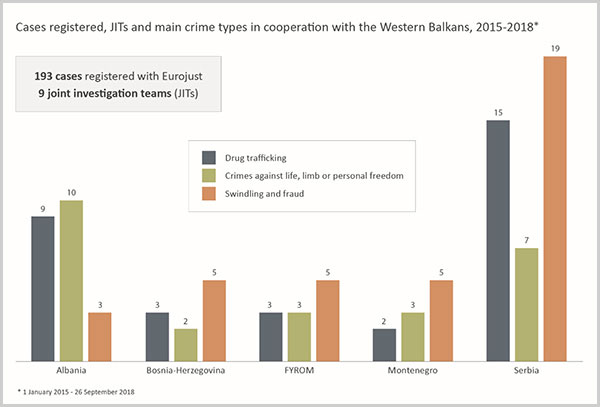 From January 2015 to September 2018, 193 cases were registered with Eurojust involving Albania, Bosnia and Herzegovina, fYROM, Montenegro and Serbia. The most common crime types were swindling and fraud, drug trafficking, as well as crimes against life, limb or personal freedom. During the reference period, 9 joint investigation teams (JITs) between EU Member States and Western Balkan States were established (click on image to enlarge).

Eurojust is the European Union's Judicial Cooperation Unit set up in 2002 to stimulate and enhance the cooperation between the competent authorities of the Member States and improve the coordination of their investigations and prosecutions, in relation to serious organised cross-border crime. Eurojust can formally cooperate with third States with which it has signed cooperation agreements for the exchange of judicial information and personal data. Currently, Eurojust has concluded cooperation agreements with 10 third States: Albania, fYROM, Iceland, Liechtenstein, Moldova, Montenegro, Norway, Switzerland, Ukraine, and the USA. Six of these States have also appointed a Liaison Prosecutor to Eurojust.