The CrimEx expert group in criminal matters has decided to set up a series of six key tools for judicial and law enforcement cooperation with the South Partner Countries participating in the EuroMed Justice (EMJ) programme. These tools will now be further developed by high-level Short-Term Experts (STEs) who have been engaged to support the CrimEx group. They will enable asset recovery, protection of personal data, joint and parallel investigations, procedural rights of defendants and victims, bilateral agreements and the transfer of electronic evidence across the Mediterranean. 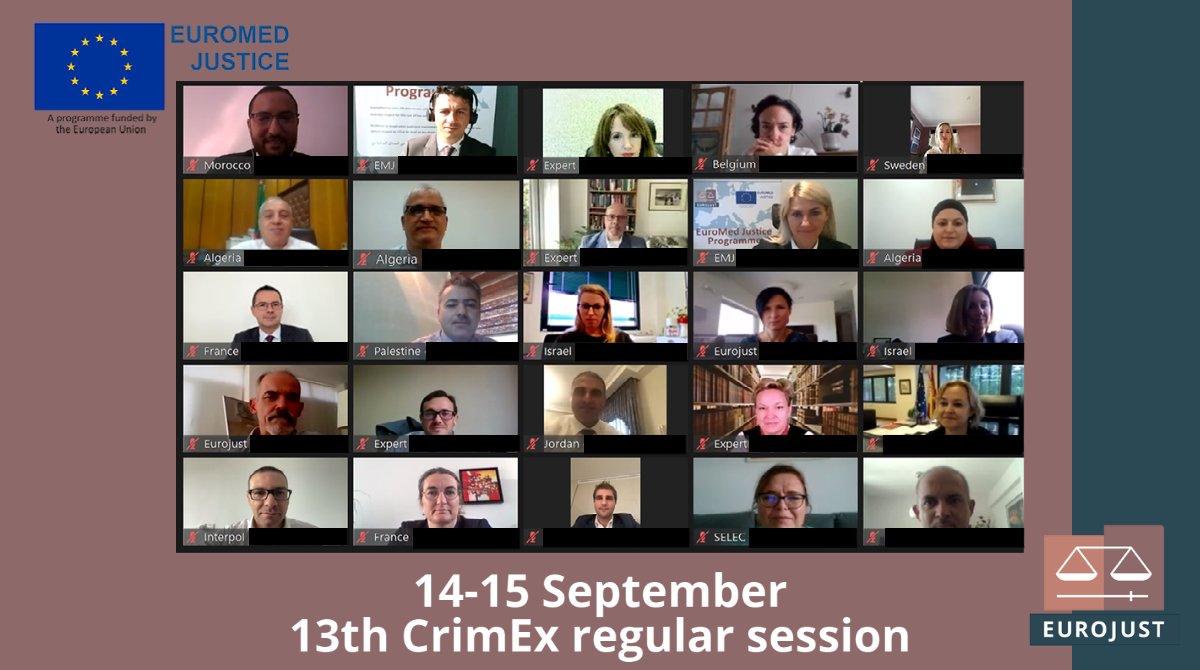 This was the main outcome of the 13th session of the CrimEx expert group in criminal matters organised by Eurojust this week. An agreement on the appointment of the high-level STEs had already been reached earlier this year. This expert group includes senior judges, prosecutors, lawyers and academics

During the CrimEx session, the experts reported on the state of play of developments. For this, they have been able to build on the replies to detailed questionnaires which have already been sent out by the national authorities of the South Partner Countries (SPCs). During the current phase of the programme, the following tools will be created:

The 13th session of CrimEx was presided over by Morocco, France and Greece, with participation from the United Office on Drugs and Crime (UNODC), the European Judicial Cybercrime Network (EJCN), EuroMed Police, the International Association of Prosecutors (IAP), the Southeast European Law Enforcement Centre/Southeast European Prosecutors Advisory Group (SELEC/SEEPAG) and CyberSouth.

Mr Filippo Spiezia, Chair of the Anti-Trafficking Team at Eurojust and National Member for Italy, also presented the Focus Group of prosecutors and judges fighting migrant smuggling to the CrimEx group. He addressed the issue of direct contact between the judicial authorities of EU Member States and South Partner Countries, to explore the possibility to enhance cooperation and synergies.

EMJ brings together the most relevant stakeholders in the field of criminal justice to develop a sustainable cross-regional mechanism of judicial cooperation in criminal matters between EU Member States, SPCs – Algeria, Egypt, Israel, Jordan, Lebanon, Libya, Morocco, Palestine* and Tunisia – and EU Justice and Home Affairs Agencies. EMJ is hosted and implemented by Eurojust.

The next major step in the EMJ programme is the 3rd Forum of Prosecutors General, which is due to take place in The Hague at the end of this year. Further information, as well as all publications, are available on the EMJ website.

*This designation shall not be construed as recognition of a State of Palestine and is without prejudice to the individual positions of the Member States on this issue.